ENG ITA
SEARCH
Cornelius Vanderbilt was the greatest American shipping and railroad tycoon of the 19th Century. He was born in Staten Island, New York, on May 27, 1794 to a family of Dutch descent. He left school at age 11 to work with his father, a farmer who had to travel by sea from Staten Island to New York to sell his produce. Thanks to a loan from his family, in 1810 Vanderbilt bought his first boat and started a ferry service on the same route his father regularly took.

Two years later, the British attempted to take back their former American colonies in the War of 1812. By now, Vanderbilt had developed a large fleet of transport boats. The US government chartered Vanderbilt’s fleet to ship provisions to forts around New York City. The experience earned Vanderbilt the nickname, “the Commodore.” In 1813 he married his cousin Sophia Johnson. They had 13 children together. At the end of a business venture with ship owner Thomas Gibbons, who ferried passengers between New Brunswick and Manhattan, Vanderbilt inaugurated his own steamship company on the Hudson river in 1829.
Low fares and comfortable vessels kept business thriving, and quickly made Vanderbilt a millionaire. Ten years after it opened, the company was one of the top employers in the US. In 1848 the Gold Rush began. Thousands of Americans raced to open and explore mines in the western United States. Vanderbilt’s recently opened steamship service from New York to San Francisco [Accessory Transit Company] reaped enormous profits. During the 1850s the entrepreneur expanded his holdings to include railroads. Vanderbilt acquired two major railways in 1863, one from New York to Harlem, and another from Albany to Rochester.
He purchased a third line in 1873, and soon unified his three routes to create the first railway service between New York and Chicago.

At the same time, Vanderbilt initiated construction of Grand Central, a new train station in New York. The enterprise employed thousands of laborers who had lost their jobs during the 1873 economic crisis. During the last years of his life, Vanderbilt donated one million dollars to the University of Nashville in the state of Tennessee. The school changed its name to Vanderbilt University in his honor. Vanderbilt died the richest man in the world in New York on January 4, 1877. He was 82. His son William Henry Vanderbilt inherited most of his fortune, which totaled roughly 100 million dollars.
RELATED 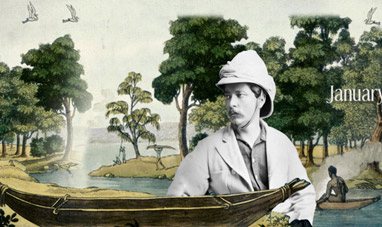